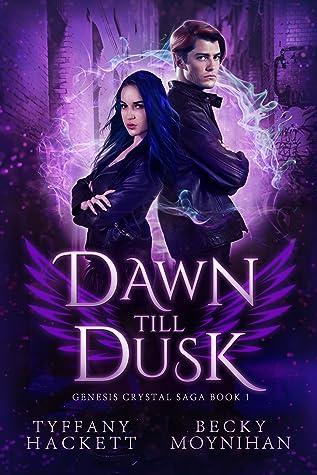 SYNOPSIS
Pain and hatred consume Tarik, the hot-headed Fae whose addiction to fighting shifters could be the death of him. Stuck in a city ruled by dragons, seeking vengeance is his only mission.

As a shifter, and the city’s Night Enforcer, Reagan’s job is to stop him. She quickly learns that trouble follows him at every turn, and keeping him alive leads her to make decisions that may have deadly consequences.

When a disastrous event forces these long-standing enemies to unravel a sinister plot, prejudice must be pushed aside. And lurking beneath the hatred is something neither of them are prepared for.

GOODREADS – AMAZON.COM – AMAZON.CO.UK –
These are not affiliate links!

It’s not a secret I love Tyffany Hackett’s work – not if you’ve read my review of Imber and maybe even the one on the sequel, Tellus. So when I got offered the chance to join the streetteam for Dawn Till Dusk, I basically jumped at the chance! And was impatiently waiting for the eARC to make its way to my inbox. Are you ready?

Knowing this book is written by two authors, I was curious to see what it would feel like. Being familiar with Tyffany’s writing, the question was whether or not I’d enjoy it seeing merged with someone else’s. Conclusion? Didn’t mind it one bit! The combination of fast-paced events, slower-paced moments and the flowing between the two was well done by both authors. I also really enjoyed the attention to detail when it came to descriptions and the outlining of action-packed scenes.

The cost of getting close to me was scars. It was only fitting that I should bear some of them.

There are two main characters, two points of view and they’re both written by a different author. Where Tarik, an elf, struggles with his past and has yet to overcome it, Raegan, a lion shifter, struggles with her present. Seeing both of them challenge themselves to put the past behind them, to deal with the present.. was.. addictive, maybe? I couldn’t get enough of it, that’s for sure.

The world-building was done well. I did have a lot of questions at first, but they mostly got answered throughout the book. The ones I didn’t get answers to? Well, I’m pretty sure I was meant to be stuck with those since I’m sure I’ll be finding out more in the sequel. So I can’t complain! Points!

I’m intrigued by the story itself. There are things going on we only get to see part of – for now – and although I had my suspicions from the start, I was still invested in the story. I wanted to find out how it would progress and get to the point I foresaw. [I sound so omimous right now but.. whatever.]

If she’s a white angel, then I’m the black demon in the shadows waiting to drag her down to hell.

There’s only one thing I struggled with while reading, and.. it’s something that’s mentioned on the Goodreads-page of this book. The enemies-to-lovers thing. Sure, they were enemies at first, but I feel like there was some progress missing at the start of their relationship to show how they actually fell for one another? It went too fast, too abrupt for my liking and it felt less real to me because of it. I am a sucker for slowburn romances though, so that’s definitely playing its part here as well.

If you like a story with two different, yet like-minded main characters, with magic and elves and shifters and maybe even more magical creatures to come – you should totally check out this new series!

What are some of the best books featuring enemies-to-lovers you’ve read?
Would you read a book based on “elves, animal shifters and dragon shifters”?
What’s important to you when reading a book written by multiple authors?