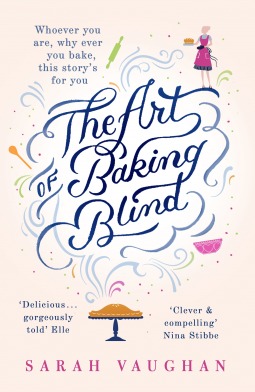 SYNOPSIS
There are many reasons to bake: to feed; to create; to impress; to nourish; to define ourselves; and, sometimes, it has to be said, to perfect. But often we bake to fill a hunger that would be better filled by a simple gesture from a dear one. We bake to love and be loved.

In 1966, Kathleen Eaden, cookery writer and wife of a supermarket magnate, published The Art of Baking, her guide to nurturing a family by creating the most exquisite pastries, biscuits and cakes.

Now, five amateur bakers are competing to become the New Mrs Eaden. There’s Jenny, facing an empty nest now her family has flown; Claire, who has sacrificed her dreams for her daughter; Mike, trying to parent his two kids after his wife’s death; Vicki, who has dropped everything to be at home with her baby boy; and Karen, perfect Karen, who knows what it’s like to have nothing and is determined her façade shouldn’t slip.

As unlikely alliances are forged and secrets rise to the surface, making the choicest choux bun seems the least of the contestants’ problems. For they will learn – as Mrs Eaden did before them – that while perfection is possible in the kitchen, it’s very much harder in life.

I’ve had this one on my TBR for quite some time now and the reason I got a copy should be fairly clear to anyone knowing me. I’m a sucker for baking – even though it’s been a while since I made cupcakes! Should do something about that, right? A book like this? With a baking competition mentioned? Consider me done for!

Diving into this book, I honestly hadn’t felt like baking for quite some time. My head simply hasn’t been in the right space, nor do I have a lot of time left what with the upcoming move and everything. This book, though? Well. Let’s just say I discovered the magic of microwaved cake in mugs. Seriously, do not think it isn’t  good because it so is! With all the baked goodies mentioned and even the descriptions of how things are made, I got this urge to eat cake. I didn’t care whether I had to bake it or buy it, I simply wanted. cake.

Safe to say I loved the whole setting of this novel, right? Not only because of those descriptions, but also because it made me see the characters in a completely different way. Since the baking competition is only during the weekends, we get to see everyone both in their personal lives and when they’re participating in the contest. Outside of it, you could see what they were struggling with – each having their own problems – while, during the competition? You saw how they had one thing in common: their love for food and baking.

It does have to be said that this novel tackles a whole lot of triggering themes that are worth mentioning. Each character has their own problems, and some of them can be hard to read about. As such, there’s bulimia, there’s challenged body-shaming, there’s mention of an abortion and there are multiple miscarriages which are not only mentioned, but sometimes also described. I didn’t know about these things up front and, luckily, it didn’t bother me all that much while reading since it added so much depth to the characters but I know there are always people who like knowing these things up front.

In the end, there’s only one thing I kept struggling with and that’s all the different characters. All five competitors get a POV and sometimes we even get the POV of one of their family members, the judges and the deceased Kathleen Eaden. The latter ones were always pretty obvious but our fixed cast of characters? Definitely confused me a ton of times. I always had to wait for some kind of hint regarding the POV’s “issue” before I could place them.

I would definitely recommend this one to people who love baking, love cooking / baking competitions and don’t mind all the themes that are mentioned and tackled in this book. Even though it felt like a heavy read at times, it still had a light vibe to it in the end.

I have a weakness for baking, but what’s a theme you can never, ever say no to?
Have you read many books with said theme / subject?