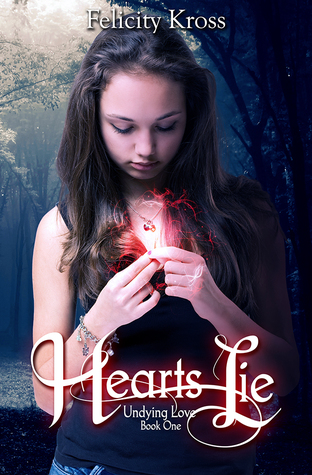 A little while back I joined a giveaway on LibraryThing and was lucky enough to receive two eBooks by the same author, Kestra Pingree!
Since I’ve been keeping myself to a fixed reading schedule [read one ARC, read one other book, read one ARC again], and I just finished my latest e-ARC… Well, I immediately decided to start one of my two prizes, being Hearts Lie.

[Just adding that Kestra Pingree formerly published under Felicity Kross – which means some books can not be found under Kestra Pingree on Goodreads.]

Why did I start with Hearts Lie and not the other one, Awash with Summer Roses? Because the blurb sounded way too good!

Sixteen-year-old Tasia Wren was born with the ability to see and communicate with ghosts. She knows a thing or two about the supernatural, but she’s mostly like any other teenage girl—even when it comes to boys. She’s in love with her best friend Rynne, the boy every girl wants to date, but she doesn’t know how to tell him. Just when she works up the courage to act on her feelings, her life starts spiraling out of control.

Tasia may know things most people don’t, but that doesn’t prepare her for the darkness the demon named Arsen brings to town. He’s not your average demon either. He’s the son of the most infamous demon ever known. The night Tasia meets him is the end of her life as she knows it. She faces death, confusion, and no option to ever turn back. She and Arsen share an inexplicable attraction as well as a much deeper connection, a soul binding connection.

She never thought she was anything special, even with her gift, but greater forces are at work. Even the people she knows aren’t who they seem. Nothing is a coincidence. Vampires, werewolves, demons, angels… Everything Tasia has ever heard of is much more than a fairy tale, and she has to face it all.

I have to say, though, that I kind of struggled through the first chapters. Kestra Pingree’s writing style is very detailed – detailed in the things characters do, not in the descriptive way – and it took some time for me to get used to.

Fortunately, that little annoyance disappeared the more I lost myself in the story. And what a story it is! This book fluently flows from one event to the next. I didn’t find any part of it boring whatsoever and wanted to read more, find out what was going to happen, was everyone going to survive?!
Isn’t that exactly what a book is supposed to do? Yes, it is!

I loved how the story switches from Tasia’s point of view to Rynne and Arsen as well. This makes everything that more interesting since you, as a reader, know more than the characters.
You also get a better feel of them, understand them better and they so obviously each have their own voice and characteristics. I love it when an author succeeds at doing that!

“I’m saying we all have different strengths, but it doesn’t make any one of us less important than another.”

Even though I absolutely love the story, the events and the overall world Kestra Pingree has created, I did have some minor problems with the characters.
The blurb said Tasia is in love with her best friend, Rynne, yet… They don’t act like best friends at all. Like, not at all? I was confused at first and thought I’d misread the blurb but nope, it’s there. I really thought it was a pity that their friendship wasn’t expressed more clearly.
As for Rynne himself, he just seemed detached sometimes… Like he’s just a character following the motions he’s supposed to follow without any substance. I don’t know, it just felt… empty when I read some chapters in his POV.

Even though there were some things that I would’ve liked different, I still loved the story itself. And, honestly, I hope I find the time soon to read the sequel!
I cannot wait to find out what’s going to happen next. Especially because… Go Arsen!

Something I just need to add is that I don’t get this author isn’t more known. Honestly, she has great potential and I’m really looking forward to reading Awash with Summer Roses [and even buying the sequel to Hearts Lie because Arsen!]

If you want to read it, head on over to Amazon.com. Of course, you can also add this to your Goodreads-TBR!

Munches! Yes, munches! I’ve been baking some cupcakes again recently and was messing around with my frosting when I stumbled upon the perfect one for this book. A bit of Angel-light with a whole lot of demon-darkness!

I received this copy through a giveaway on LibraryThing. I am not being compensated for my review in any way. All opinions are entirely my own.